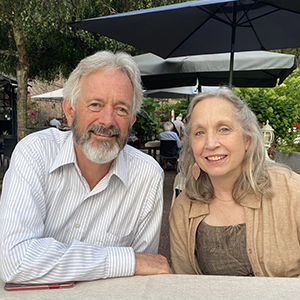 Steve and Miki work in ministry among artists in France, where they have served since 1988. Based in Paris for the first 30 years, they began in church planting and leadership, pastoral care, and urban ministry projects. In the late 90’s, Steve helped launch an active Christian theater company, La Compagnie des Actes. Witnessing the group’s success in reaching French secular culture led Steve and Miki to a calling in ministry through the arts and among artists. They became core members of La Fonderie, a Christian artists association. For 10 years they were part of the team at Le Pavé d’Orsay, a multipurpose art space in the heart of Paris that Steve directed. Miki performed on stage in several Christian musicals and helped launch a program connecting Christian musicians from Europe with young musicians in Madagascar. In 2018, the Thralls moved to the Normandy countryside to launch a retreat for artists called La Pommeraie, where they welcome professionals of all disciplines who are looking for rest, pastoral care, and inspiration for their next projects. Alongside their work, they are involved with a church planting network in the region. Since 2020, they serve with Artists in Christian Testimony.

If you'd like to make a donation to support
Steve & Miki Thrall
, you can do so here.
This is some text inside of a div block.