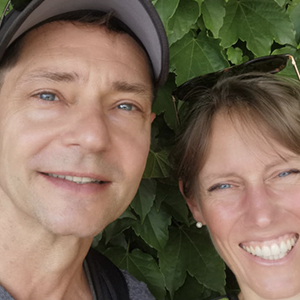 Damien and Gudrun Reeves have been serving at the Christian retreat centre, Champfleuri, near Grenoble, France, since 2001. They have four children between the ages of 23 and 13. Damien is the director of the centre as well as director of the French-speaking Torchbearer Bible School, DÉFI, held from September to March at Champfleuri. Damien helps lead the Perspectives church in Brignoud as an elder. Gudrun works as the replacement cook and the bookkeeper at Champfleuri. She accompanies the female students as well as teaching at DÉFI. She is also on the board of Zoé France (the French branch of Lifesprings Women’s School of Ministry). The centre is open year-round and organizes camps for all ages during the different school vacations. When not hosting their own organized camps, the team at Champfleuri welcomes church groups and seminars during the week and on weekends.

If you'd like to make a donation to support
Damien & Gudrun Reeves
, you can do so here.
This is some text inside of a div block.