Supporting students through the pandemic

On 14th March 2020 President Macron announced that all educational establishments needed to close as a result of the pandemic. At the time, few students realised how long it would be before they saw their lecture theatres again – for some it wouldn’t be until the start of the new academic year in September 2021! But the lack of interaction wasn’t just limited to their studies. Successive lockdowns and curfews made it very difficult to develop any relationships in the real (non-virtual) world. A female student told us that during lockdowns she would spend hours sitting in the bathroom of her little studio flat just to make a change from being in her bedroom!

Although at the start of the pandemic fear of the virus was certainly a reality, what really came to worry students was a fear of restrictions being prolonged or reintroduced. But, of course, there have been numerous other problems too:

·        deteriorating mental health for many students due to isolation

Foreign students encountered additional difficulties: French nationals living in halls of residence moved back to their parents, which wasn’t possible for those who’d come from overseas. Some of those who’d come from countries with poor health systems were very worried about family members as their homelands became overwhelmed by Covid. One female student we know well had to go through the incredibly painful experience of losing her mum in Brazil during the first wave without being able to see her before she died; she couldn’t go to the funeral or grieve with the rest of her family either.

Our ministry focuses on these foreign students, working with an organisation called AEM (Amis des Étudiants du Monde), similar to Friends International in the UK. Pre-Covid, we used to hold discussion evenings in the Perspectives church in Nantes on Fridays that were open to all students, whatever their culture or religion. We sometimes had up to 130 visitors! Covid, of course, put a stop to that. We decided not to try and continue on Zoom because students were using that medium all day for their classes. We needed the Holy Spirit’s help to find innovative solutions for meeting students since, during the lockdowns and curfews in France, it was only possible to move around for urgent reasons and an official document was necessary to justify being out and about. One of the officially sanctioned “urgent reasons” was distributing food, so, for more than a year, our main activity was picking up surplus stock from bread shops and then taking the food to students in their shared flats, halls of residence, etc.

This certainly helped those who were struggling financially but, even more importantly, we were often the only people these students saw apart from the other students they lived with. Some of the discussions that we had with them led to reading the Bible together. During this time, we were also able to deepen relationships with certain students and have had the joy of seeing one of them come to the Lord and decide to get baptised.

At the start of this new academic year, we’re not only continuing to visit students with food parcels, but we’re also pleased to be able to start in-person events once again. We don’t know for sure how the year is going to pan out, but God does – and He’s shown us that our restrictions don’t limit His work. The gospel hasn’t been locked down and never will be. 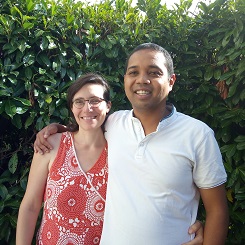