Jesus fell on one of our pilgrims!

Sharing the gospel is hard in France. It’s all too common for evangelical Christians to be lumped together with Mormons and Jehovah’s Witnesses! However, our location in Reims has proved helpful in circumventing such misunderstandings as we’re on the Via Francigena, the ancient pilgrimage route from Canterbury to Rome. Hundreds of walkers, cyclists, and even a few horse riders follow this route every year. During a visit to the cathedral, we chatted to the ladies who run the help desk for pilgrims. They said that they’re always looking for more people to host travellers. With both our children back in the UK, we had three spare beds and so our details were added to the ladies’ list.

Our first guest arrived with a dog and was obviously exploiting the generosity of well-wishers. He didn’t have any money but was walking to Rome. Lesson 1: don’t accept dogs who sleep on beds resulting in expensive dry-cleaning bills. Lesson 2: ask if they have their pilgrim “Credentials” – an official card that gets stamped along the route.

Our next guest was a Catholic nun who was taking a year’s sabbatical and was walking to Rome. She was the same age as me (Joy) and was very interested to receive a Gospel in English to carry with her. When shown the bedroom, she said: “Oh, I don’t need a bed!” and unrolled a sleeping mat. She sent us a postcard from Rome four months later.

Reims is not only on one route but two. One of the Chemins de Saint-Jacques de Compostelle starts in Belgium and passes along the road adjoining ours. I can accost backpackers and chat with them even if they haven’t booked to stay with us!

Covid reduced the number of walkers significantly, but so far this year we’ve had 27 guests. We love it! We enjoy finding out about them and can share our testimony of God’s call to come to France. As they class themselves as “pilgrims” the door is open for conversations about faith and whether they’re seeking God. Only one has refused the offer of a Gospel, but that was on the grounds of weight! When I suggested that I could put it in the post for him, he had no objection. This week we’ve talked about Alpha courses to a couple involved in their parish church in Belgium and slipped in a brief four-point gospel outline (see thefour.com/en/).

In mid-July we had three young Italians who were doing a section of the route from Reims to the Swiss border. When they came down to breakfast, one reported that he’d been woken in the night by the large drawing of Jesus on the wall above his head falling on him. We all hooted with laughter and his friends cried, “It’s a sign!”

We’ve been in France now for 16 years, far longer than we ever imagined. We have cute little grandchildren in the UK whom we’d like to see more often. Is there anyone out there who wants to try the mission field in France? We have a nice little town house, near to all the facilities, schools, bus stops, TGV, and motorway to Calais. Would anyone be interested in a house swap for chunks of time so you can get a taste of life in France? We have all the cutlery, tea-sets and linen needed, and fruit in the garden that will keep you supplied with jam and crumbles. The young men so enjoyed blackberry and apple crumble with Bird’s custard, that they ate it again at breakfast!

Although Jesus didn’t fall on our guest in a spiritua lsense, we pray that it’s an image of things to come – that Jesus might be at work in the pilgrims we meet and that something will touch them and draw them to Him. 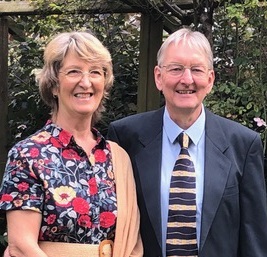