Bringing change to the teaching

Literally “the town in Bresse”, Bourg is situated between Lyon and Geneva. It’s known for its blue cheese and white chickens (!) and is the prefectural town for the Ain département. The major industry is a Renault truck factory plus the administration and hospital. It’s on two major routes from west to east and north to south, so there’s a lot of European transit traffic.

We moved here in October 2019 to be closer to our grandchildren and some of our adult children, with Chris accepting the role of pastor of the Protestant Evangelical church in the town. We left the church-planting project in Auray in the good hands of Nicolas Engel.

The church in Bourg belongs to what would be the equivalent of the Open Brethren in the UK. It was not originally with this denomination but was started in the 1960s by a mission that worked in the Alps. The affiliation to the Brethren came later when the church had grown and had a structure. They possess their own building in the northwest part of the town. This is the first time that the church has had a pastor and before our arrival they had been functioning with no leadership team for several years.

One of the things that we wanted to bring to the church in Bourg-en-Bresse was to put the Word of God at the heart of the weekly service. To start implementing this, I (Chris) have put into place a systematic teaching program for the Sunday service. The idea is to move away from an ad hoc arrangement where on any given Sunday any text could be preached. Also, I wanted to move away from a situation where there was more luck than planning if the worship leader prepared something that was coherent with the sermon. The text for the sermon was to be used for preparing the whole service.

I’m also hoping for us to move away from church services being prepared by a series of individuals, cut off from contact with one another and lacking feedback on how they did, to a team preparing the services together.

The problem with implementing the plan is that I’m starting with no other participants. All the previous people who preached or led church services no longer attend the church. So, whilst having to do all the preparation for church services myself, I have started a training program for service-leading and preaching. So far, 4 people have begun the course. It’s a case of having to start from where you are rather than spending your time wishing you were starting from somewhere else.

So, for the last 3 months of 2021 we went through 1 John and are now in the Old Testament in the book of Ezra. Ezra is known as Esdras in French and I chose the book because of its theme of rebuilding. How an alienated people, without land and without visible evidence of God being amongst them made a journey back to the promised land and recovered what had been lost. A real physical journey, but also an emotional and spiritual journey: an analogy for the people of God who are alienated but not abandoned and an analogy of rebuilding which requires hope and faith in God which produces courage and perseverance in His people. The story is not only about the rebuilding of the temple but the building of character and communal joy and celebration when God succeeds in accomplishing His word.

Your continued prayers for the church and our role here are greatly appreciated. Thank you. 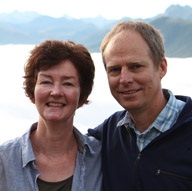